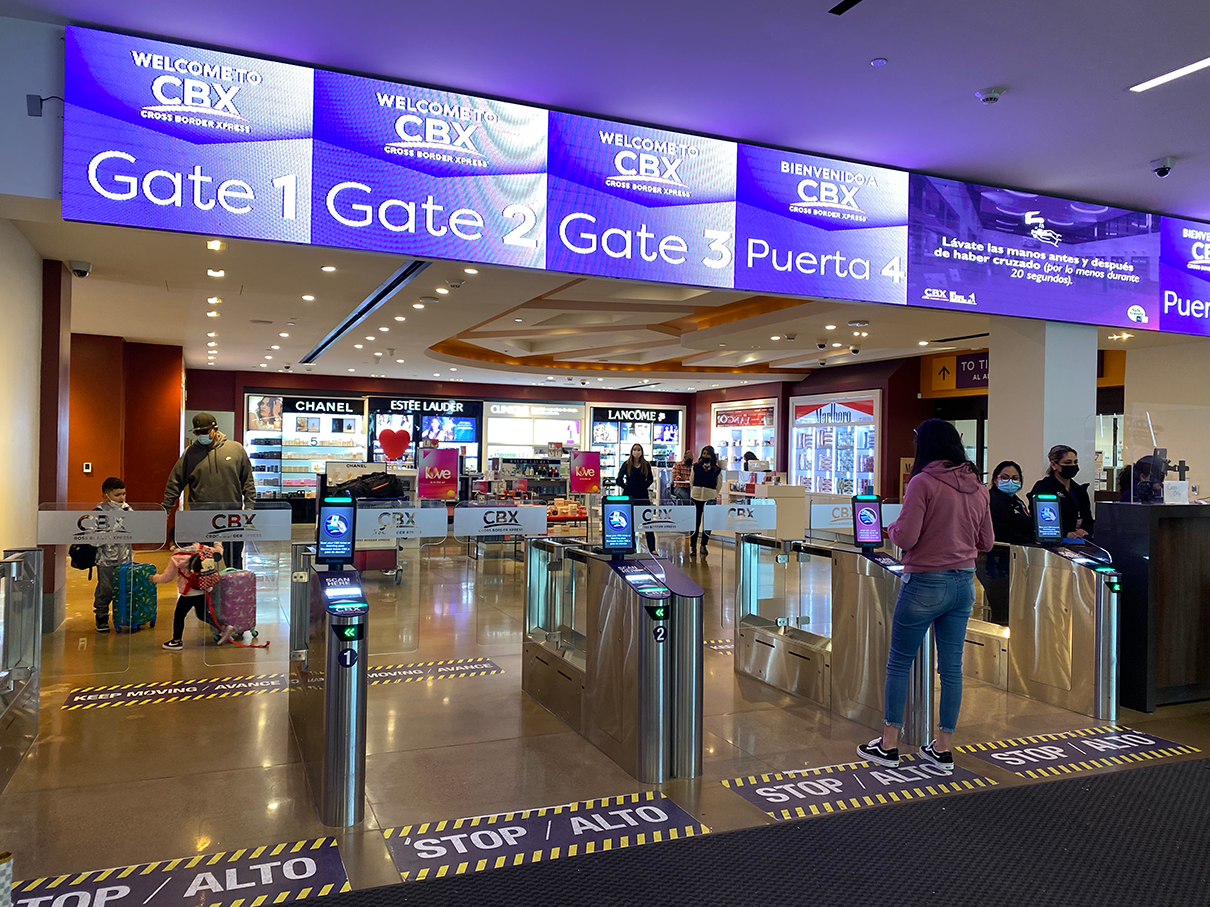 On February 16, the CarlsbadtoLAX team together with travel agents from ASTA San Diego Chapter had the opportunity to visit the Cross Border Xpress (CBX) complex, a modern land bridge that connects the Tijuana Airport to Southern California.

CBX is a service managed by the private sector in conjunction with the federal authorities from both the United States and Mexico, which allows millions of people annually to cross the border between Tijuana Airport and the U.S. safely and efficiently.

In order to use the CBX crossing service, passengers must have a plane ticket and purchase a CBX ticket for access to the bridge. Tickets can be purchased on the official CBX website, ticket offices and self-service electronic kiosks in the CBX facility, the CBX App, as well as through numerous 3rd parties, for example at the same time when purchasing a plane ticket on VivaAerobus, Volaris or Aeromexico.

The tour was guided by Alejandra Madrigal, who works as Commercial Manager at CBX. Travel agents from ASTA San Diego also participated in this tour with the coordination support of Beth Taylor President ASTA San Diego Chapter, together with the CarlsbadtoLAX team.

We began by listening to some arrival instructions to be able to cross from the United States into Mexico. You can get to CBX by taxi, scheduled daily shuttle (including via TijuanatoLAX from North County San Diego), rideshare, be dropped off, or leave your car for days via paid parking provided by CBX. 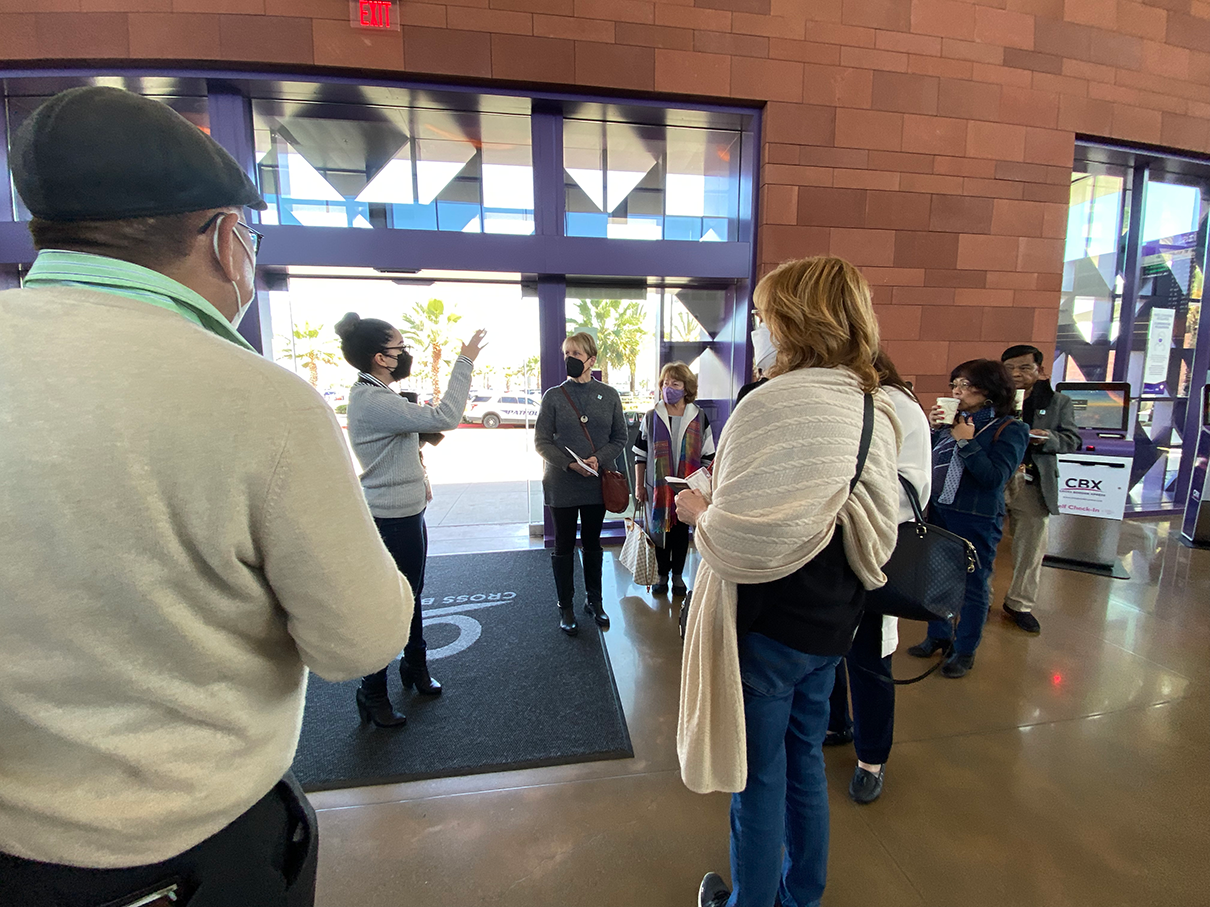 To cross from the United States to Mexico:
If you are an American citizen, you only need your valid passport, boarding pass, and to fill out the "FMM" form that is published on this official page or you can pay and fill out the form directly at the designated area in CBX.

Mexican citizens do not need to fill out this form and only need to present an official identification or passport, their CBX ticket, and also hold a plane ticket.

At the electronic doors, you scan the QR code from your phone or printed ticket.

Next, we went to the bridge area, where you must cross a distance of 390 feet walking. Here it is important to take into account if someone in your party requires walking support or help with their bags to cross the bridge, which CBX can also provide via additional purchase to the standard ticket. 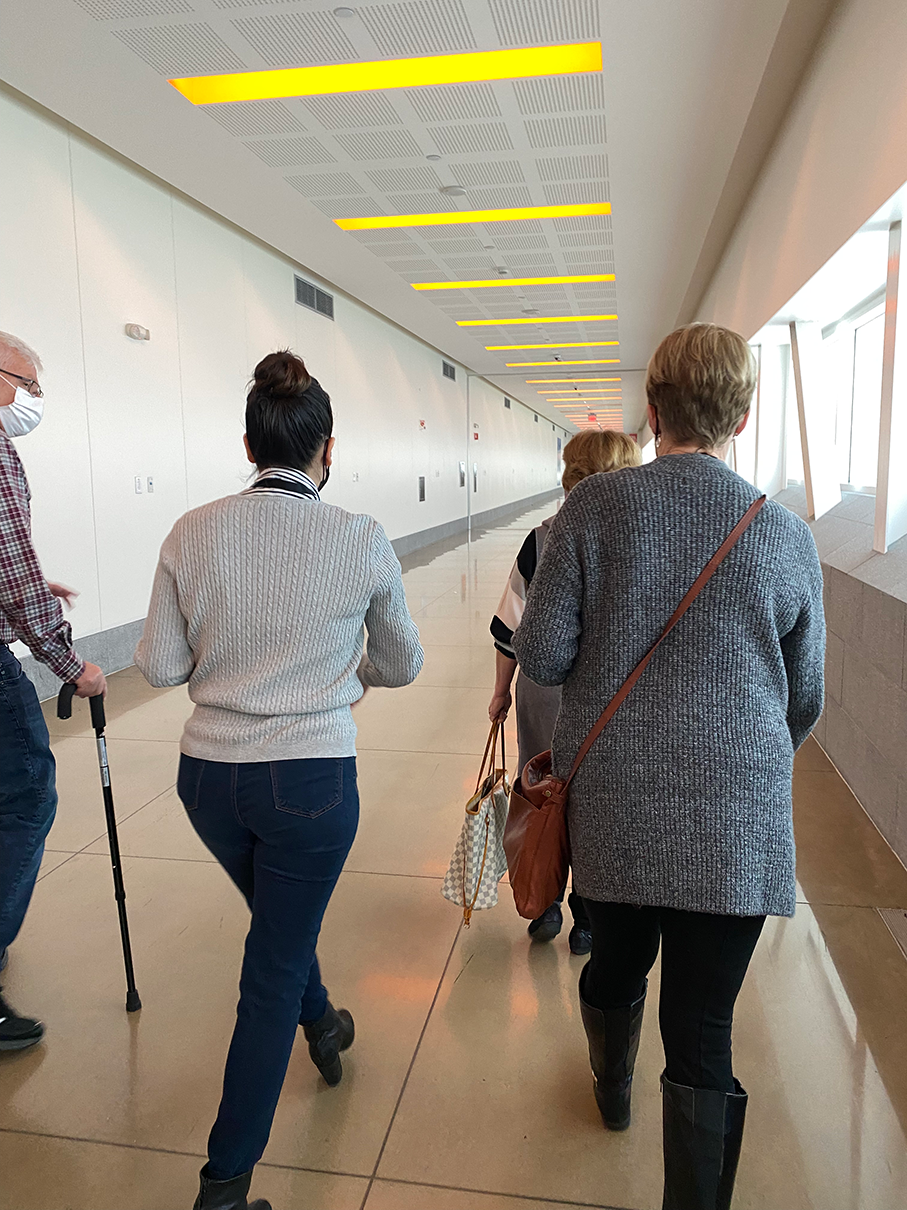 The bridge is really wide, illuminated, and very clean. On this occasion, it was not too crowded, but this can vary depending on the time or day of the week, holiday season, and other factors. 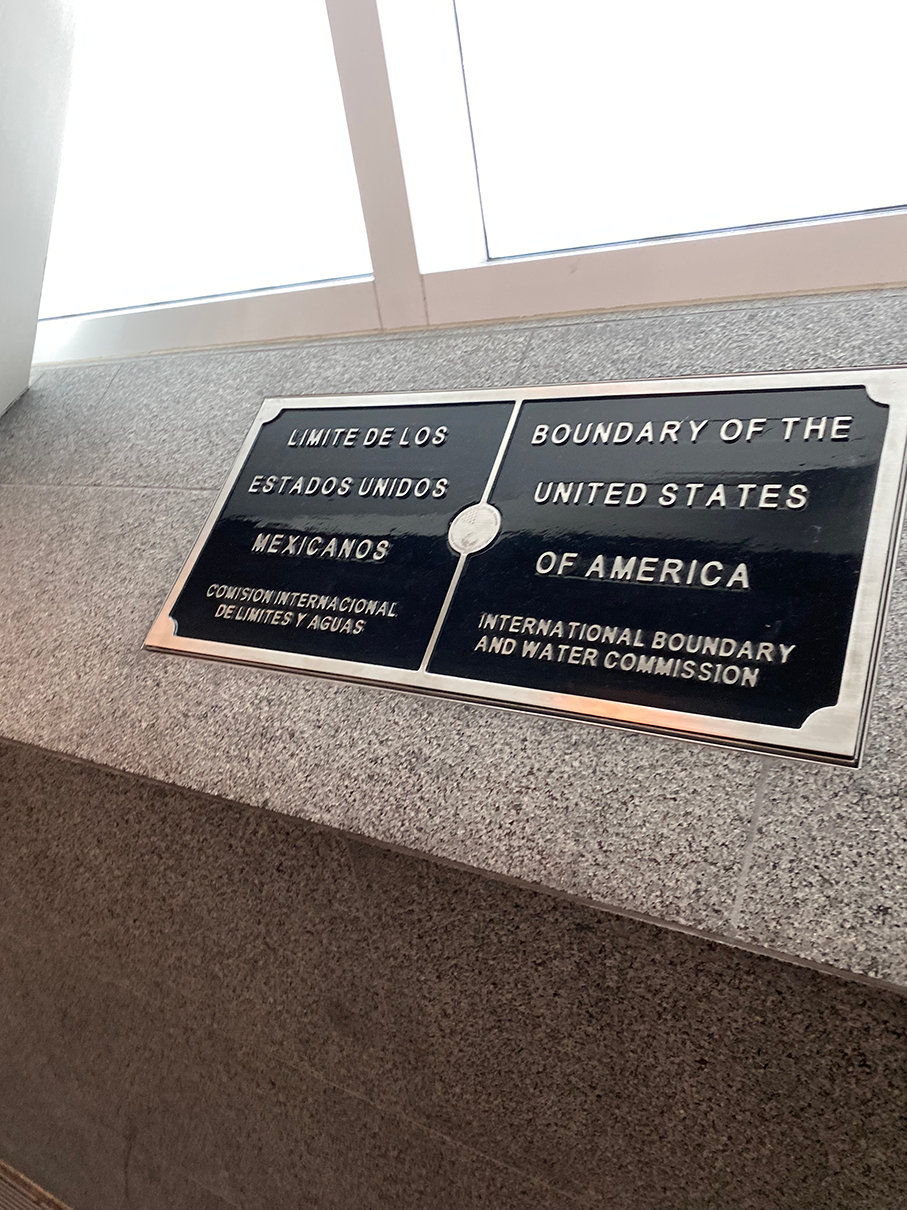 At the end of the bridge, Mexican immigration agents carry out baggage inspections and have customs offices for "self-declaration" of items for those who wish to do so.

Mexican passengers only need to show a valid passport or any other Mexican official identification to access Mexico, then pass their luggage through the X-rays. 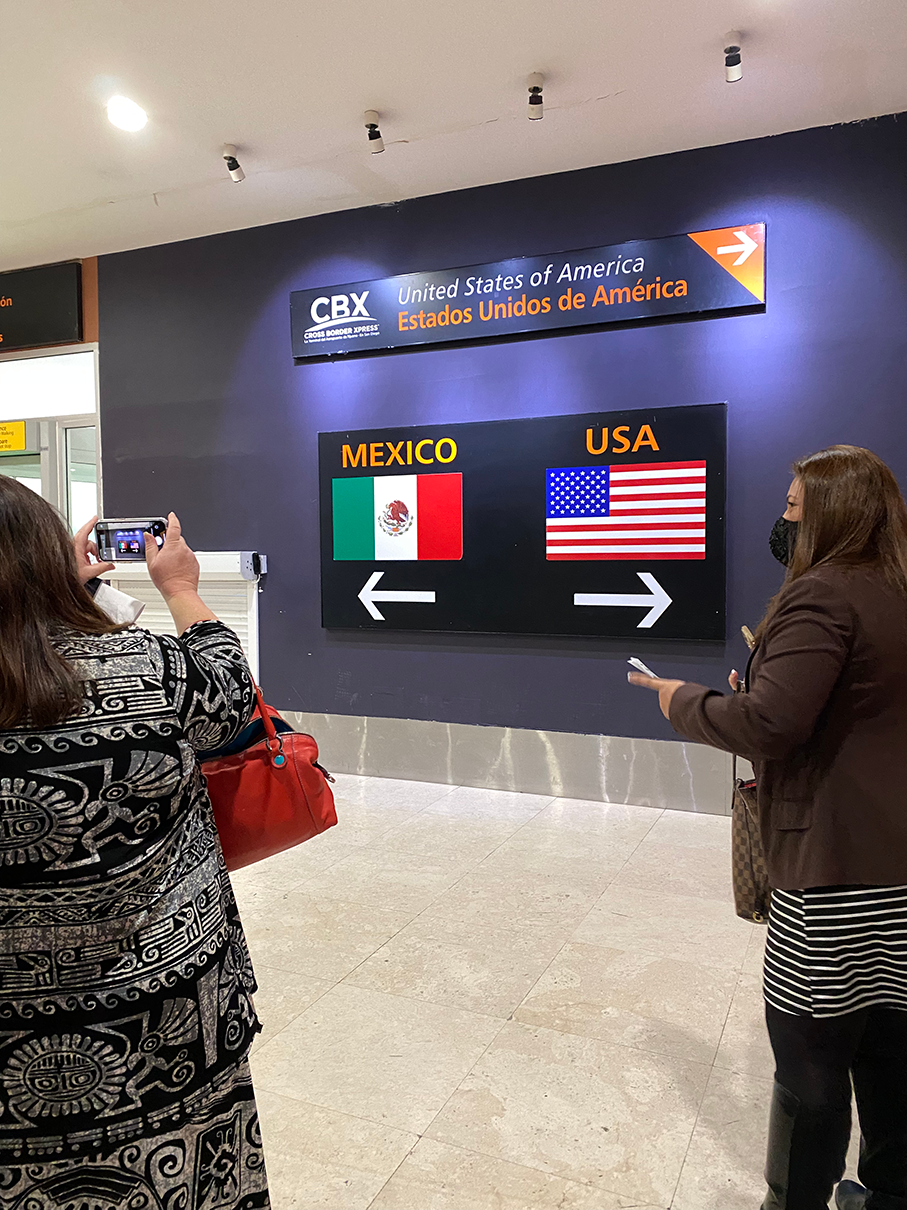 To cross from Mexico to the United States:
If you are a US citizen, you only need to present a valid passport or passport card, CBX ticket, and your airline's boarding pass.

As a Mexican citizen, it is necessary to present a valid visa, Mexican passport, and your paid and filled "I-94" form in case of visiting for more than 30 days or traveling more than 25 miles within the United States.

Once issued, the I-94 permit is valid for 6 months and can be prepaid to expedite processing. More information here.

To enter the United States through CBX, it is also necessary to scan your valid ticket with a QR code at the CBX electronic gates.

Returning to the U.S., the bridge is in the same fashion as the north-to-south one, wide, illuminated and even offers a support service with staff or trolleys to load suitcases for those traveling with a lot of bags.

After walking a little and taking the stairs or elevators, you will find the United States Customs and Border Protection (CBP) area, where the use of telephones and cameras is prohibited.

Regardless of nationality, CBP agents will conduct a similar process as other land, sea and air ports of entry in regards to documentation and interviews.

Once we were processed by CBP, Alejandra guided us back to where we started, CBX on the US side, thus concluding this experience. During the tour we saw step by step how this innovative land border solution works and better understood the benefits.

In CBX on the United States side, there are several transportation options available such as taxi, Lyft, car rental, (Uber is not available), and Shuttle service by van or bus with the company Damaris Express Inc.

And at CarlsbadtoLAX.com we offer service from CBX on the US side to transfer you from the border to Carlsbad's Palomar Airport or LAX Airport, making it possible for passengers to fly from one of the largest airports in the United States, with more non-stops and better prices than other airports in California.

Go back to our blog to check more posts

Have any news, event, or useful information to share with us?
Email us at info@carlsbadtolax.com, we'd love to talk!